An Interview with Rachel Slater

How would you define contemporary dance to someone without a background in dance?

It’s always a tricky question. I recently took a job teaching dance at a public high school. While some of my students are highly trained, others are new to dance. When I explain contemporary dance, I often tell them it’s a dance form that prioritizes expression, but it’s tough to define what it looks like because it can be presented in so many ways. It can be done to any sound score: pop music, spoken word, classical music, silence. There’s a range of performance spaces, from a proscenium to a warehouse, from site specific to film. As far as choreographic creation, contemporary dance can run the gamut. There’s a lot of freedom and variety in the way choreography is generated, more than what is often found in a traditional or classical setting. There’s often a focus on research and improvisation to generate material. What I end up saying to my students is that contemporary dance can look like almost anything, and is largely defined by its intention to be contemporary dance. 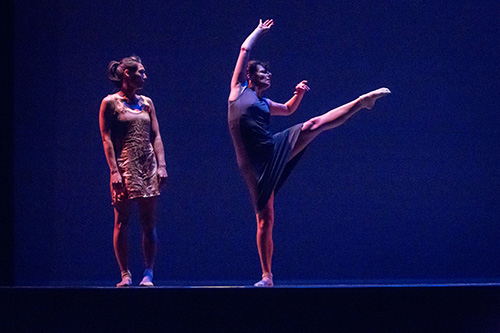 What training would you recommend to a student who has aspirations to be a contemporary dancer?

There’s a huge emphasis on versatility. I would start with a strong background in ballet, because from there you have the ability to go anywhere. You can use the foundation or disregard it, but it’s hard to rewind and go back to ballet. After ballet, I would recommend layering as many techniques as possible. It would be helpful to take a Trisha Brown class, a Doug Varone class, release technique, Gaga, Countertechnique, Forsythe improvisation modalities, etc. It’s about getting your feet wet in a lot of different ways. Some settings will have a more classical approach, asking you to make certain shapes and perform certain steps. Others are going to focus on concept and task. If you can get a handle on multiple ways of working, you’re going to be valuable to many different choreographers. Having experience in diverse settings is also going to help you find your own interest and palette. Even at a younger age, it is important to consider what kind of dance you want to pursue, although your answer will probably change and evolve over time.

Does contemporary dance refer to any dance that is new, or is it a genre unto itself?

I catalogue contemporary as the most recent incarnation of modern dance. Modern dance was a rebellion in the early 1930s against the classical forms. In a way, I think contemporary dance is a rebellion against postmodern dance. Contemporary dance asks: How can we build upon post modern’s exploration of concept/performance art while still being expressive and technically daring? How can we still value the technique, training and physicality of dance? How can we train our minds to support the massive amounts of work we are asking our bodies to do? It’s also a constant exploration of what the human body can do. Has everything been done?

Are there new funding models for contemporary dance?

It’s a tough question to answer under the best of circumstances. There is a huge movement toward freelance artists. Of course, there’s still the company trajectory of: Hey mom, I got a job in a company and I take class every morning and rehearse the rest of the day. But as funding continues to dry up, that model is less and less feasible. Additionally, companies are not often able to take really big risks artistically or financially. In terms of successful funding for someone who really wants to push the envelope and take risks, honestly, I don’t know. Sometimes you can find foundational funding or build a donor base in order to put on a successful show, but a lot of times dance artists piece-meal their funding together. Many dance artists get their funding by doing other work, which is often what engenders the ability to take risks and explore.

I suspect every city and country are different. I have friends who work in Europe, and even though the funding for dance is less than it was 10 years ago, my dance friends in Europe don’t hold other jobs, whereas most dancers in the United States have to hold an additional job. Even if you’re in a company with a salary, you won’t have that job your whole life.

Being able to be creative with funding is often a necessity, especially for emerging artists. I’m in Portland, Oregon, and the city is growing quite fast. On the one hand, that’s awesome for dancers, as it means there are more people wanting to make work. But it also means the small amount of funding has more applicants. It’s tricky. 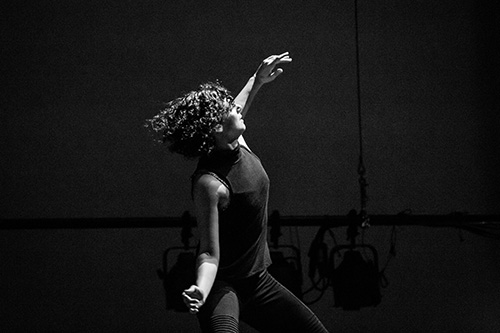 What do you perceive is your own contribution to the field of contemporary dance?

As a choreographer, I’m interested in people. When I start to develop a new work, I’m interested in my dancers bringing their own perspectives, which I think is a distinguishing feature between classical and contemporary. I don’t want dancers who are blank slates waiting to be imprinted upon by a choreographer. If you go into a rehearsal process in a contemporary scene, you will often be asked to improvise, speak, write. As a choreographer, I’m interested in having real people in the room with me, not just someone who will nod their head and say, “Whatever you want.” I believe my work reflects that. I want to make work about a conversation relatable to the audience. Dance can often be elitist and obscure, but making dance about what’s personal can solve that.

For instance, I had a residency in 2012 where I made a piece about panic attacks. I made the piece because I was going through a period of having acute anxiety, and making Lorazepam, Sweaty Palms and the Shakes was very therapeutic. Afterward, many people came up to me and said it was similar to their experience and relieving to see onstage. It was an opening aspect to the work, and it made it relatable to the general population beyond dance fanatics. My interest in choreography is looking at people and seeing how dance relates, how it can be relevant to life.

What direction do you see contemporary dance moving?

I’ve noticed a huge impact from technology. Twenty years ago, you didn’t hear of long distance dance companies where the dancers Skyped and sent each other videos. But technology has not only affected the process of making dance, but performance as well. There are so many ways video can intersect with dance, live or otherwise.

Going back to the first question about describing contemporary dance to people who don’t know anything about dance, if you asked them to watch a heady performance art piece and then something akin to lyrical jazz, and called them both contemporary, they’d look at you like you’re crazy. But that’s the kind of world we’re in; you can name anything you want contemporary dance. It boils down to the intention of the maker.

The funding question is really relevant right now, though I suppose it always has been. With Muddy Feet, we’re constantly renegotiating and trying to find new alternatives. It’s really about stability. If you have sustainability, you can focus on the art rather than funding the next show. It can be a draining question to readdress again and again.

Dance has a murky history in terms of finances. Dancers often don’t get paid. Because we have such a love of the art form, many dancers are willing to dance for free. On the other hand, it’s a cycle where the lighting designer and videographer get paid before the choreographer and dancer. I would really like to see more agency for the dancer and choreographer. It’s a tough juggling act.