Kelvin Vu: I’m 25 and I’m currently a dancer with the Batsheva Ensemble in Tel Aviv, Israel. I started dancing when I was 18 and a freshman at Yale. I had been a competitive figure skater but decided to stop full-time training, and I craved a new challenge that was physically demanding and artistically stimulating. Following a friend’s suggestion, during the first week of school I auditioned for Yaledancers, a student group on campus, and despite having no formal training, they accepted me. It wasn’t until I graduated from college when I decided to focus on dance, find more serious training, and explore the professional dance world.

Liz Brent: What do you remember about your first experiences in dance?

KV: Wow, my first experience was definitely memorable, though perhaps a bit traumatic, as it was the audition for Yaledancers.  Having had no formal dance training, I comically struggled through the four-hour ordeal, during which I faced the wrong way multiple times during ballet and slogged my way through jazz and modern combinations.  Somehow, the group saw a steep-enough learning curve in me to offer me an invitation, and then my dance journey began.  Fellow students taught classes (ballet, jazz, modern, etc.) every Wednesday evening and Sunday morning, and I did my best to pick up as much technique and coordination as I could.  I remember failing to fit my legs into fifth position and not picking up a single petit allegro combination for a very long time.  It was such a great experience being the worst dancer in the room.  The other students were a fantastic mix of undergraduates and graduate students who loved to dance and weren’t willing to give it up, even with the pressures and demands of being full-time students.  They were generous, intelligent, ambitious and supportive people, inspiring in their commitment to dance as well as in their support of each other and the group as a whole. 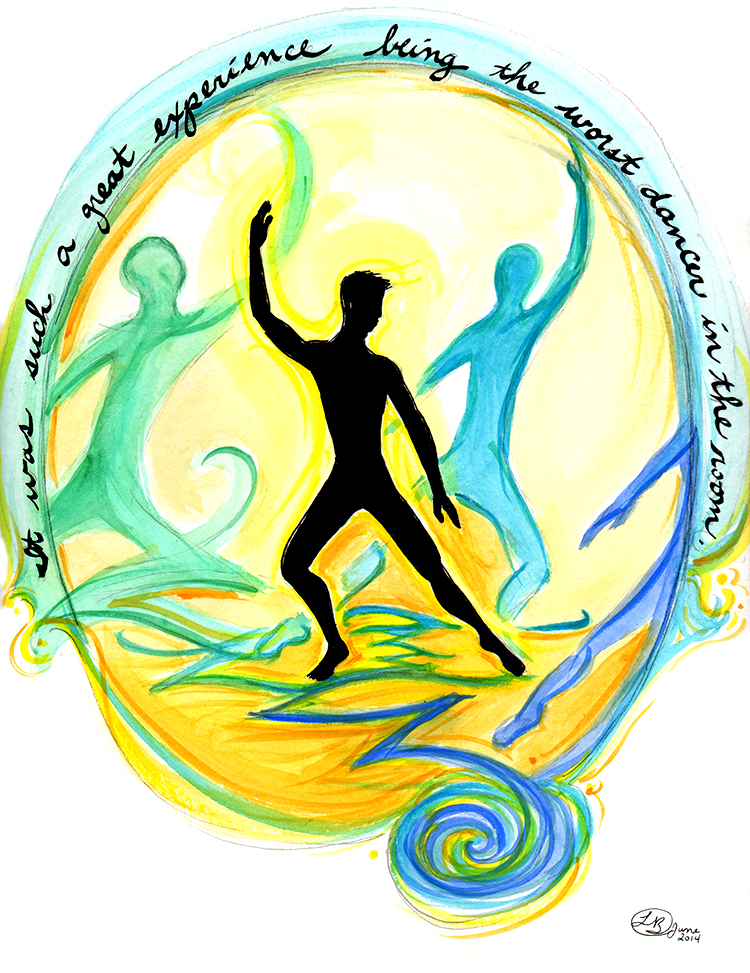 LB: What was your family’s response to you showing an interest in dance? What about friends? Or other community members?

KV: Initially, my parents were very supportive of my interest in dance.  As a freshman in college, dance was among a number of activities and interests that I explored, and I don’t think that anyone expected me to choose dance as a profession.  When I began to take it more seriously, I think that my parents were slightly puzzled and worried that I would get lost and flounder in the pursuit.  But even so, they supported my choices and continue to do so.  I was also very lucky in that my dance journey began in an open-minded community that celebrated exploration and personal pursuits.

LB: What/when was the moment when you decided to pursue dance as more than just a hobby? How did you know that this was the career or life pursuit for you?

KV: During winter break of my senior year in college, I went home and overwhelmed myself by brainstorming plans for life past graduation. I considered applying for funding to work abroad, getting a job in a major city, and preparing to apply to graduate school. But as I was home making all of these plans, I missed being in the studio at school and was already thinking about my last semester at Yale and in Yaledancers. And the more I thought about how excited I was to be back on campus to dance, the more I began to entertain the idea of giving dance a real go, finding rigorous technical training, and seeing what I could find in the dance world outside of college. I had no idea what would happen or where I would end up, but I talked to people around me, asked for a lot of advice, and kept following my gut instincts and the people (and their ideas) who interested me most. Then and now, I’ve been reluctant to call dance my life pursuit because though it’s an irreplaceable part of my experiences, life to me includes so much to ponder, dabble and dive into. That said, I knew that continuing to explore dance was the right decision because it was what interested and excited me the most.

LB: Did your family support your choice?

KV: My family has really supported me in all of my decisions and endeavors, and my parents raised me to go after what I want with diligence and hunger and commitment. I think they were surprised by my choice, especially considering that I was about to graduate from college with a degree in Environmental Studies and knew that if I really wanted to dance, I would need serious training (i.e. more school). And while I was training at the San Francisco Conservatory of Dance for two years, I think that they still didn’t know how I was going to make a life for myself in dance or a living by dancing. Now that I’ve survived and even thrived for a couple of years since graduating from college, they seem less worried.

LB: Did friends and/or other community members support you?

KV: I had (and still have) an amazing support network of people and community members who knew how much I love to dance and were excited that I was exploring something open-ended and nontraditional. No one has yet to discourage me from dancing. If anything, I’ve gotten more feedback from friends saying that they really admire the choices I’ve made coming out of college and the adventures I’ve been on. The support is mutual and reciprocal, whether it’s for a career in dance or graduate school or a volunteering gig or the search for the next pursuit. I think that there are many more options for people my age than there have ever been, and we have to support each other to keep those options open. But I also realize that I’ve been very fortunate to have had many opportunities and lucky breaks, which makes it easier to stand behind.

LB: What happens when you meet new people and they learn about your involvement in dance? What reactions do you get? Have you encountered stereotypes around being a male dancer?

KV: For the most part, people seem more curious and open-minded about my career in dance than concerned or disapproving. Of course, stereotypes exist of male dancers as overly flamboyant, shallow, or frivolous, though I got used to those stereotypes growing up as a male figure skater. But the majority of people I’ve met have been very receptive and have seemed to want to know more about how I started dancing and what life is like as a professional dancer. In the (very) rare instance of someone seeming overly occupied with negative stereotypes, I try to offer more detail about what I do if he is willing to listen. If not, I don’t feel too much of an obligation to dispel misguided notions or prove them false.

LB: What has it been like for you training and taking class? What is it like when you are the only guy in class? How do you deal with that and has that changed as you’ve gotten older?

KV: Throughout my career, training and taking class have been among my favorite parts of the job.  And I’ve been lucky to have had at least one other male dancer or male teacher to work with in the studio.  There was always at least two boys in Yaledancers, and the San Francisco Conservatory of Dance had male faculty and students.  That said, there were times when I felt the absence of strong male colleagues, especially in hyper-focused training environments.  There’s probably some chemical or social explanation to this, but there’s something about having another guy in the studio that is motivating, challenging and competitive in a different way.  As a result, I’ve tried to take advantage of opportunities to take classes with other guys or to connect with male teachers.

As I’ve gotten older, the gender ratios have shifted, and I’ve met more committed male dancers the more intensely I’ve focused on dance.  Now, in Batsheva, I have an equal number of male and female colleagues, and I’ve found a widespread network of guys.  And while the dance community will probably always include more women than men, I think that the professional world is a bit biased toward men in that there are more male directors and star choreographers, and men seem to have an easier time finding jobs.

LB: Do you feel like awareness or acceptance of male dancers is changing?

KV: I think that dance has generally found more acceptance and awareness in popular culture thanks to TV shows, movies and celebrities with dance experience. This shift has necessarily included male dancers. I don’t think that I ever suffered from any real social or societal disadvantage or stigma attached to being a male dancer.

LB: Is there anything different about specific dance communities you’ve observed as a male dancer? How does San Francisco compare to other places you’ve danced?

KV: The three communities in which I’ve danced–Yale, San Francisco and Tel Aviv–have been great places to be a dancer.  They’re open-minded and supportive.  If anything, the proportion of male dancers in Tel Aviv is higher, and a lot of the work highlights men more often.

LB: Is there anything about being a male dancer that you wish was different?

KV: Of course, I wish there were more male dancers overall. Generally, I think that it would encourage and necessitate men to work as hard as their female counterparts, and it would challenge teachers, schools and choreographers to accommodate and foster strong, intelligent and diligent men. Perhaps this is too broad of a generalization, but I think men have an easier time succeeding in the dance world because the population is smaller. Teachers are more forgiving, contracts more plentiful (relative to the number of applicants), and competition is less intense. More male dancers would push both the community and the art.

LB: What would you tell young boys today who are interested in dance?

KV: Go for it. Learn to love to work really hard. Seek out mentors. Don’t think you’re special just because you’re a boy. Be sympathetic toward girls and their experiences in the dance world because they’ve probably had a tougher time. If you love it, stay in it.

LB: What has been your favorite performance, role you’ve dance, or moment in a dance class or rehearsal?

KV: My last year in San Francisco, I was the only guy in Malinda LaVelle’s Project Thrust, a company known for its very strong female figures.  We spent a year creating “Kingdom,” a piece that was epic in its ambition and scope, and it was the most memorable and consuming of creation processes I’ve encountered so far.  It didn’t matter and very rarely occurred to me that I was the only male artist.  The journey with Malinda and the rest of the Thrusters will stay with me for a very long time.  Also, I remember and cherish my experiences at the San Francisco Conservatory of Dance, especially ballet with Summer Lee Rhatigan and her pearls of jaw-dropping and earth-turning wisdom.  Like I’ve mentioned a few times, I’ve been so lucky to have worked in great places and with such amazing people (Yaledancers, Sharp & Fine, Batsheva) that each chapter is full of favorite moments.  Now, in the Ensemble, my favorite roles are the opening solo of Deca Dance and the duet in “Black Milk,” both of which I share with the very talented Shane Scopatz.