Corey Brady: I’m 35, and I’m a full-time dancer at ODC. This is my 11th season with the company. Somewhere around 12 I decided to pursue dance. I was part of a performing arts program and studying music. I had a couple friends who were dancers, and they always needed men. The male to female ratio is uneven, which means men are sought after. I participated in a talent show or something and it was fun and I thought, “Why not?” I was totally into it. I got to this point where I auditioned for both the music program and the dance program, and I got into the dance program, and so that was it. I had to make a choice. And even during that time I asked myself, “Do I still want to study music? Or both?” It was difficult to do both seriously. Dance took over, and the physicality and making music with my body was easier for me and more interesting. 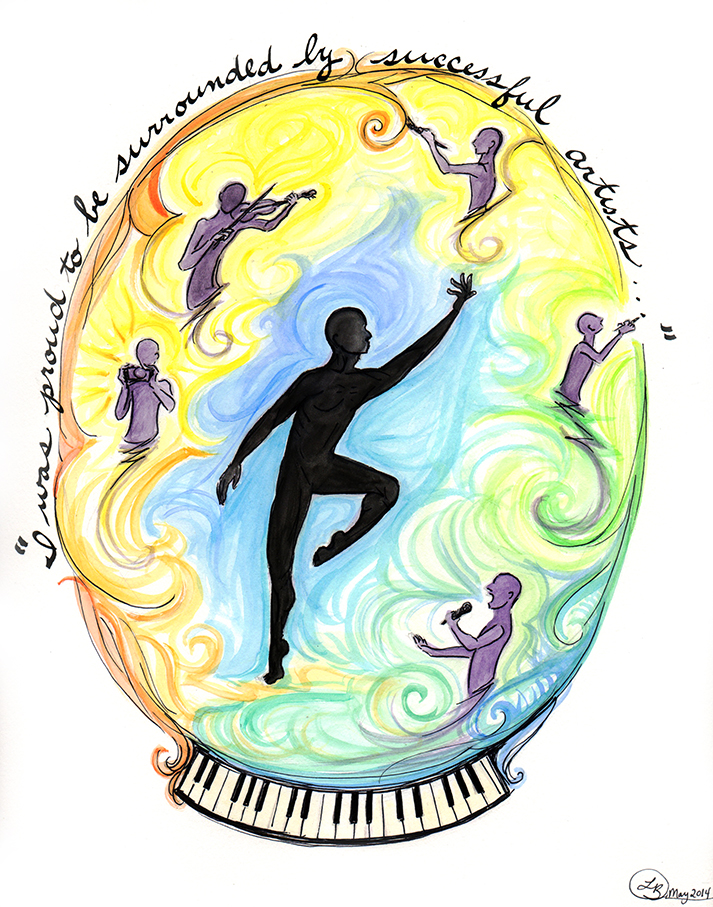 Liz Brent: When you started getting into dance, what was your parent’s response?

CB: I definitely felt supported by my parents and immediate family. I think initially they were a bit skeptical because I had very little experience. But I wanted to do it so I just pursued it. There was a little bit of doubt but they supported me nevertheless. The people closest to me were there for me. To this day there may be some people who snigger at me but it’s just ignorance and not being aware of what’s involved in dance.

LB: Was there any specific moment – either positive or negative – when you told someone you were a dancer and they were surprised by the response?

CB: Oh yeah, but not very often. Most of the time people think it’s really interesting because it’s not very common. I did have an incident where I was out at a bar with some friends of mine when this guy came up to me and at first started hitting me on. He was really wasted and asked me what I do and when I told him I was a professional dancer, the next thing out of his mouth was, “No, seriously what do you do for a living?” And I said, “Excuse me?” and we proceeded to have a very heated conversation that ended very quickly. I had to shut it down. He basically wrote me off: “I didn’t ask what you do for a hobby. I asked what you do for a living.” I was very surprised by that. It was the first time I had come across someone who had that kind of thought process around dance. I had to take a couple steps back and think. The fact that he wasn’t in his right state of mind probably affected how he handled the situation. But that was really one of the only times I experienced negativity.

LB: You said you went to a performing arts high school. What was that experience like?

CB: Learning a lot about many different forms of dance and being around a lot of different artists was very humbling. Being around a lot of art and music and people expressing themselves – most people don’t get that kind of experience in high school.  I’m around very talented and successful people today too, and I just feel proud to be part of that group.

LB: And what did you do for college?

CB: I went to the University of Oklahoma and majored in dance performance. There were two tracks students could choose, either teaching or performance, and I chose performance. I had a more typical college life than my high school experience.  It was good for me, having to study other subjects and learn things outside of the dance world.

LB: Where do you see yourself moving toward in the future?

CB: I’m hoping to perform at least for a few more years, wherever that is. There are other people I’d like to dance for as well. I’d also like to get more into teaching and choreography. I’ve been doing Pilates, so that is something else I’d be interested in pursuing.

And then outside of that, I want to travel and play and see the world and stay in the dance world but have a different perspective and pass along something.

LB: What are some lessons you’ve learned that are specific to being a guy who dances?

CB: We all play certain roles. Even at ODC where we’re more on equal footing, as a male you are expected to do certain things like partner for instance, which involves being very strong. So there’s a real awareness about that. I think the biggest thing for me is getting away from having to be masculine. Who I am is who I am. I am masculine, but I don’t have to play into a certain role. It’s a very personal thing. But I think as much as we think we’re getting away from it, it’s always on the horizon. So I have to be aware of that. Or if I’m playing a specific role I have to be able to turn that on as well. So it’s also about being able to do what’s being asked of you.

LB: Do you feel like the awareness of male dancers has changed during your career?

CB: Well I have noticed that there is more male participation. I’m seeing more young boys taking dance classes. It’s still uneven, but there’s less of a stigma and stereotype around it. I think nowadays you can see clips on YouTube and it’s not sissified or that there’s something less masculine about being in that world. So it’s good. We need more of it, but we’re moving in a good direction.

I’ve been in several roles where I’m expected to be the male and partner and whatnot and I’m fine with that. But fortunately for me I’ve had a very well rounded training, and I think that’s important for men and women, but particularly for men because we can get pigeonholed as one thing. As a dancer you have to be able to move and grow in different directions.