Christopher Dunn: I started dancing young, but I only did tap for the first 14 years of my life. My family was not supportive of dance. If I wanted to dance I had to ride my bike to get there, so I’d ride to school and then to swim practice and then to the dance studio. 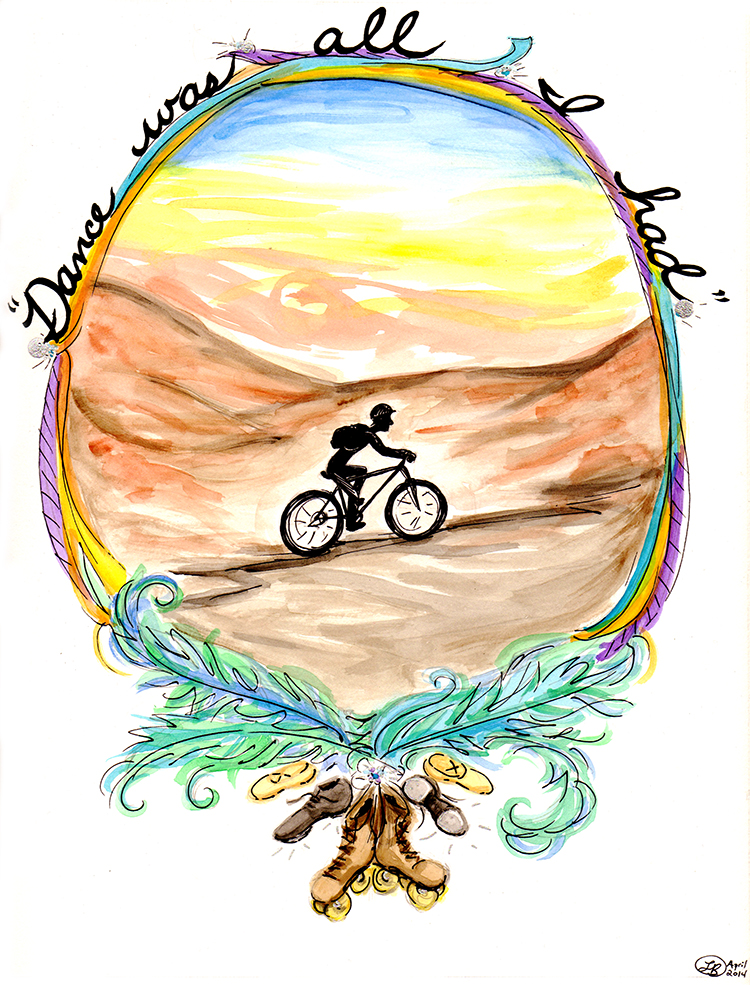 Liz Brent: How did you get into dance?

CD: My cousin who babysat me was dancing at the time, so I’d go sit and watch her tap classes. And then I said, “I wanna do that!” So we’d stay a little extra so that I could take a tap class.

LB: When you started to dance what was the reaction of your family?

CD: At first it didn’t require a lot of time, just a little recital here and there, which they were okay with. But when I started to get more serious, they said they didn’t have time. And then I kind of came out. My biological parents were devout Mormon, so my dancing was a threat, like, “Oh you’re gonna be gay?”

I basically got kicked out when I was 16.

LB: So from 16 on you were living with your dance teacher?

CD: Yeah I was living with Lisa (my new mom) and trying to get through high school. I kind of got into drugs and was fucking up my life. I had just graduated from high school and was on this drug bender and I decided to do drugs in her studio. The next day Lisa walked in and she said, “I’m going to give you a choice. You can either walk out of my life and continue with the drugs, or you can stop and continue dancing and we’ll move on from here.” So I quit drugs and never went back.

LB: Were there friends or other people in your life who helped you besides your adopted mom?

CD: Not really. I cut ties with everyone. I never talked to my parents until recently. I spent Christmases and everything with Lisa and her kids. Her kids are my sisters. That’s my family. I really didn’t have anything else but them and dance.

LB: When you were taking classes were you the only boy?

CD: There was another boy, kind of like an older brother. I looked up to him. We even did cruise ships together.

CD: Cruise ships are… a starting job. I loved being able to dance all over the world. I was in the Northern Baltic, and went off the ship in 18 different countries. I only worked three days out of twelve so it was super relaxing. The living situation was very difficult – basically an eight by eight metal box with a bunk bed I shared with another person. It got old really fast and I couldn’t get away anywhere. I did that for two years total.

LB: What kind of dancing did you do on the cruise ships?

CD: I did a little of everything. Primarily jazz, contemporary, lyrical, whatever you want to call it. I did a whole prince variation from Romeo and Juliet and the girl was en pointe. Another time we had to roller skate. It was the scariest thing ever. On opening night the sea was really rocky and we weren’t even doing the choreography, just trying to stay on stage. So we took our roller skates off and just pretended.

After I came back from the cruise ship I said, “I want to REALLY dance.” So I devoted myself to building a company in Reno with my mom.

And then during the 10th anniversary of the Nutcracker I felt so tired of doing the same role and the same thing and I knew I needed a change. I felt stagnant in my professional career. My mom was very supportive. She said, “You need to go where you need to go.” I came to San Francisco over an extended weekend and auditioned for Napoles Ballet. The audition was on Saturday and we started on Monday.

It’s been a whirlwind. My life is a whirlwind. Until now I haven’t been tied down to anything, just going where life takes me.

LB: What got you into doing costumes?

CD: At the studio we rehearsed at there was a costume lady, and she was totally intriguing to me. I wanted to make my own dance clothes because they weren’t as glamorous as I wanted them to be. Guys’ costumes are so boring compared to tutus. I love making tutus. So I did that and then I helped as a dresser for Vegas shows, which was so much fun with all the rhinestones and sequins.

LB: Have you encountered any specific stereotypes around being a guy in dance?

CD: I used to find ten years ago that almost all the male dancers I knew were gay, and now I find there’s many more straight men that feel like it’s okay to dance. It’s refreshing, that straight guys feel okay to dance.

Even in Reno it’s turned around. Some years for our Nutcracker we were almost fighting for male dancers. And then the last two years we had more men company members than we did women. We were trying to find females to dance with these men. And the funny thing is that another guy and I were the only gay ones and the others were straight.

LB: Do you feel like you’re often the only guy in class?

CD: It depends on the class I’m taking. But I don’t really care. I’m there to fix my own problems. I don’t need to worry about everybody else.

LB: Do you have anything else you’ve learned or any other stories to share about being a man who dances?

CD: For the first ten years of Nutcracker I was pretty much the only guy. I basically danced every male role. I felt like I had to keep trying to inspire the boys who came in and keep them happy. I felt like I wanted them to replace me, not compete with me.

LB: Any other thoughts?

I recently saw my biological parents again when my grandfather died. I had some stuff stored at his house and I ran into them there. I think my biological mother feels sorry and is starting to come around but doesn’t know how to do it since she’s been estranged from me for so long. We don’t know what to talk about. I’m very happy now; I have a husband and a house and a dog and a life and she’s not a part of it. I don’t feel bad that she’s not a part of my life because she didn’t want to be a part of my life back then. I thank my mom Lisa every day, because I don’t know where I would be if I didn’t have her. I put the rest of it behind me. I don’t feel pity or sadness, just that I made my path and this is where I went.