I recently found myself at a singing retreat with my aunt, and one of the participants was Stella Matsuda, a dancer who runs a sacred dance company. Since, in the handful of times I have attended religious services I have never seen dance, I was keen to talk more with Stella about the intersection of dance and religion. 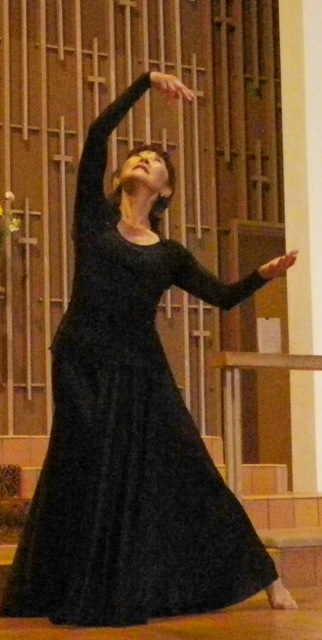 Stella first fell in love with dance as a five-year-old in an internment camp in Arizona during WWII. A few years later, when her family was allowed to return to Los Angeles, she began lessons in ballet, tap and acrobatics. She majored in physical education with an emphasis in dance at UCLA (there was no dance major at the time), and went on to dance with Gloria Newman Dance Theater for 12 years as a principal dancer. Throughout her years dancing professionally she also taught dance and started a family. Eventually she taught full time on the faculty of Moorpark College. In 1977 she started Alleluia Dance Theater, a sacred dance company, which has for over 35 years now brought dance as a form of worship to others in workshops, retreat settings, churches, festival celebrations and community organizations.

Open to all faiths, a main thrust of Stella’s work is education, showing people who may never have danced before how movement can honor God. I spoke with Stella to learn more about the connections between dance and spirituality.

Emmaly Wiederholt: You primarily use modern dance as opposed to ballet or other classical forms. Since you do a lot of outreach, do you find modern dance lends itself to being more accessible than ballet? Is modern dance more common in the liturgical dance genre?

Stella Matsuda: It’s not necessarily liturgical; liturgical just means it follows a liturgy, which is the church form. So pretty much we say “sacred dance” because it may be out of the liturgy. When I look at sacred dance there are the dances that came out of Africa or the Native American culture or even Europe. Dance just existed. People didn’t separate dance and religion. It was all one. Every culture has had that on every continent. It goes into the whole history of dance.

For us in the Western world so much of our dance has been considered evil because the church fathers preached against theater and dance and that we shouldn’t be moving our bodies. The body was something to be covered, not exposed. So to have dance in church is really a big step. Some churches accept it readily and some churches still separate dance as bad.

A lot of people look at ballet and see it is such a beautiful medium and think, “That’s really pretty.” There is a company – Ballet Magnificat! – that does ballet as a form of sacred dance out of Mississippi, and though I haven’t seen them in the last ten years or so when I last saw them they were very powerful. People really loved it. They told stories and did all the things I’m trying to do but it was all pretty. Sometimes with modern it might not be pretty, per say, but I think it’s more expressive, which is why I like to use it, and it’s my background too. For me it comes naturally. If I’m going to interpret a scripture it comes from my modern base of finding movement. I find modern dance is the best way to translate expression. That’s not to say that ballet doesn’t work.

EW: I’m curious about the connection between dance and Christianity since some churches have historically been very opposed to movement, dance, and bodies. How new is this openness to dance in church attitudes?

SM: Dance has really been a part of the spirit forever. It’s just that as churches come and go different standards have applied. Once, Catholic churches were very open to having dance as part of the mass. Then new popes came in and said there will be absolutely no dance during the mass. So dance comes and goes. Now it really depends on who the priest is. I’m not Catholic but I’ve danced in a lot of Catholic churches, and the priest might be very open to dance, but he’ll say, “We’re not going to call it dance. We’ll call it movement interpretation of this song or scripture.” And so they’ll get away with it, so to speak. Other churches will say, “We can’t have you dancing during mass but you can do something just prior to mass and we’ll call it a preface to worship.” Again, with the churches I’ve worked with, it depends on whoever is in charge and how they feel about dance.

As far as the congregation goes, some people are open to it, saying, “What you do is so beautiful. I was moved. I was touched. It gives worship another dimension beyond singing and talking.” Some people love it. Other people will say, “I don’t feel comfortable with you dancing in church.” And if those people are more powerful in the church leadership then they’ll can it. So much depends on the church leaders, and that’s true across denominations. Some Protestant churches will include dance every single week, others will never have it. I don’t know how to quite explain why some people are open to it and some people are not. Sometimes people are uncomfortable with dancers coming in for their worship service. But after we finish, they are supportive, saying what we do honors God, is beautiful and sacred.

EW: Can you talk about the the connection between movement and worship throughout history?

SM: I see all of life as sacred and therefore whatever we do with our bodies, when done with sensibility, can be a sacred expression of how you’re feeling and how you’re worshiping. There was dancing mentioned in the Bible but for other purposes than glorifying God. And that’s the bottom line: why am I dancing? Am I glorifying God? Am I glorifying myself? Am I worshiping someone other than God? For instance, when they danced around the golden calf in Moses’ day, they weren’t dancing for the right reasons.

So again, know why you’re dancing. Does it heighten worship and contribute to a spiritual good? As people watch you does their sense of spirituality deepen?

Thinking of Ruth St. Denis and Ted Shawn, way back when they were starting to teach and choreograph, and even Martha Graham, they really looked at religious themes and incorporated them within their dance. Whether or not they were trying to promote spirituality is debatable. But even Balanchine put The Prodigal Son into movement. Or Alvin Ailey’s Revelations. When it’s done like that people will just look at it as a dance. They’re not preaching about it – maybe that’s the difference. But you still see dance and religion tied together.

But I think the key difference again is whether you’re promoting yourself or promoting the spirit. As I said before, the difference is in taking dance to a higher level of worship.