From nude to couture, what the audience sees performers wearing radically affects their experience of the performance. In order to take a closer look at the important role costumes play I interviewed costume designer Keriann Egeland and choreographer Aura Fischbeck. Egeland has created costumes for Katie Faulkner, Nina Haft, and Randee Paufve. Fischbeck is a local choreographer whose recent piece “Corpo-Reality” explores her perceptions of self through a series of costumes. 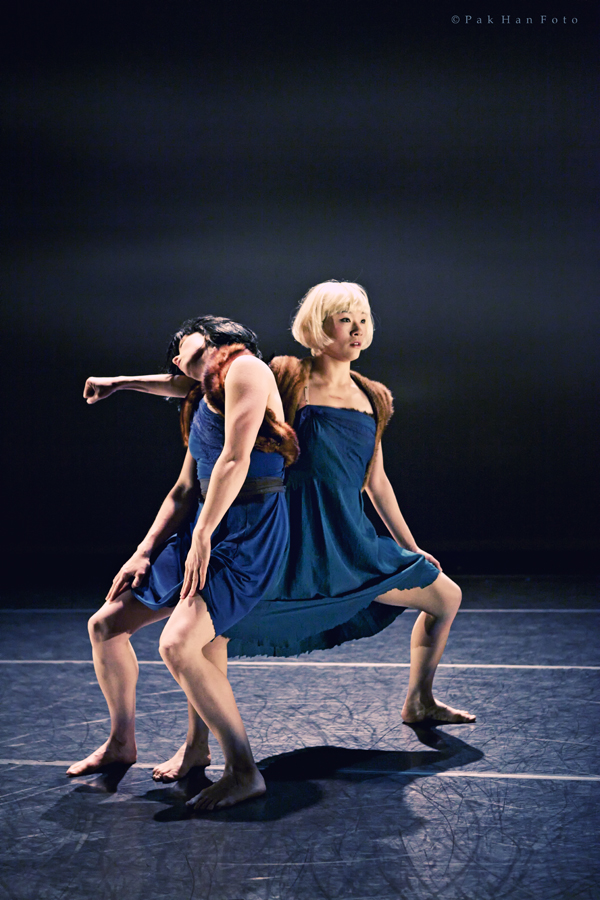 Emmaly Wiederholt: How did you get into fashion design? When did you transition from fashion to dance costumes?

Keriann Egeland: I guess it all started in high school. My mom knew how fashion-obsessed I was (my walls and ceiling were completely covered in pages from Elle and Vogue), and when she noticed I was interested in sewing my own clothing she set me up with one of her old machines. She hadn’t sewn clothes since she was in her teens and early twenties, so she was sometimes just as lost as me. This led to ditching the patterns and directions and exploring on my own. Most of these creations were a bit of a disaster, hence when I reached college I decided to give patterns another chance. Throughout college I did a mix of trying out different patterns and making some of my own creations. As I became more immersed in the dance department at USF I began getting interested in costuming. I found myself going to dance performances and wishing people were wearing something else. I got a job being the costume assistant for the dance and theater department and that’s when it all started coming together.

EW: How do you feel your unique perspective as both a dancer and a costumer influences your designs?

KE: Coming from a dance background gives me a certain insight into a choreographer’s work. I have been on all sides: a dancer, a choreographer, a critic. This means I can more easily get in tune with what the choreographers are trying to express. Once I get a sense of that I begin to figure out how the costumes can support that vision.

I find ways to costume the dancers so the audience can connect to them. It is very important that the costumes do not alienate the audience. The audience will need to feel a relation to the clothing and the movement in order to understand the emotion of the piece. 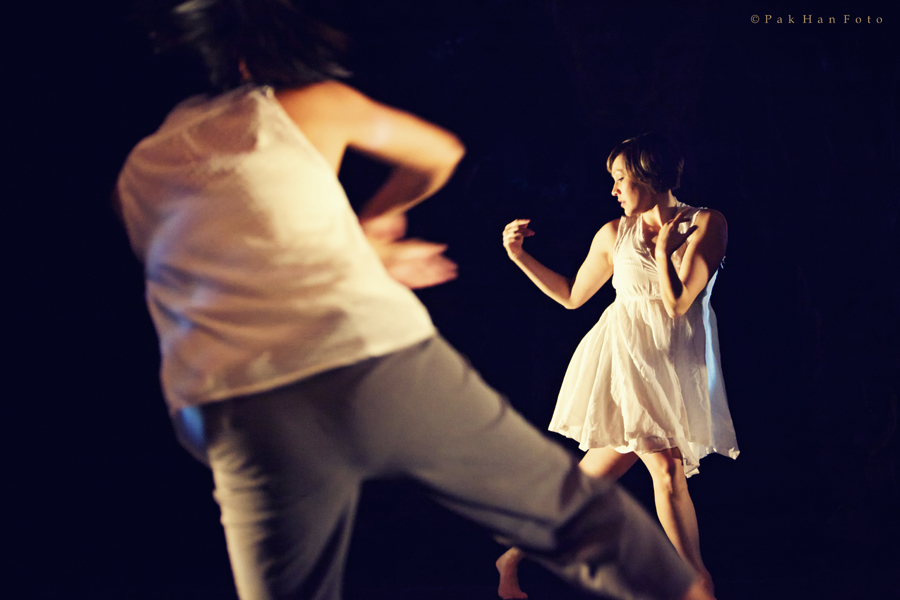 EW: What do you have to take into consideration when building a dance costume that you wouldn’t normally consider in a non-dance design?

If I am using a fabric with little stretch I need to be very conscious of the cut and shape of the garment (no sleeves, full skirt, extra space for the dancer to breathe fully). It may be extra work for me (more fittings and fine tuning) but it is all worth it when it comes together. 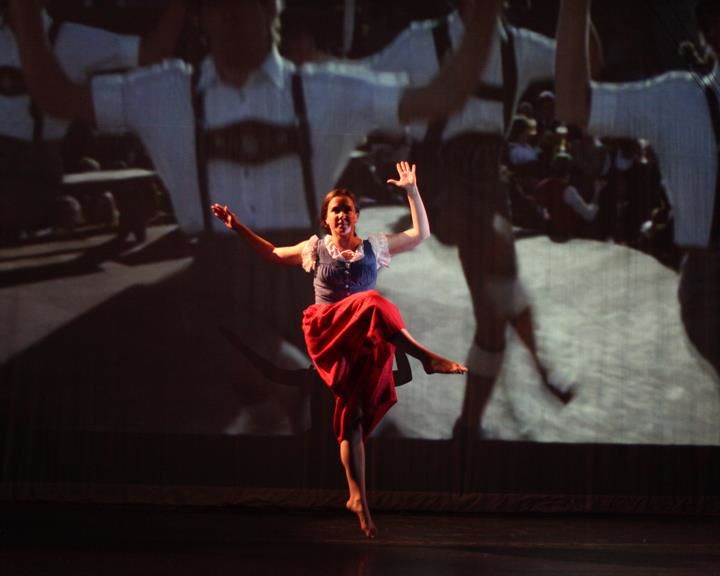 Emmaly Wiederholt:  How did you conceive of the idea for “Corpo-Reality”?

Aura Fischbeck: I had been thinking about the notion of dancing the dance that my body dances, which is different from anybody else’s dance.  I think so often in dance we are asked to imitate and execute a variety of styles and steps, but not necessarily asked as dancers to really know our own body’s expression and vocabulary.

With that in mind, I wanted to make a piece about being a first generation American, and how I feel that being born into an artistic, bohemian, dancing family has made me aware of always feeling somehow outside the realm of “normal”. All these aspects of me come through in my dancing, whether I like it or not. So in creating a new solo for myself, I was trying to get to the core of what my body is. There’s anatomy, personal history, genetics, psychology, personality, all translating here on stage into an embodied experience.  In the different sections of the dance I was unpacking different aspects of my identity.

EW: The different costumes felt like they represented different permutations of you — in underwear, in an evening dressing gown, as an iconic German, and as a young modern American. How did you settle on those four permutations?

AF: The first costume I wanted to be as simple and bare as possible, like a blank slate, without being distracting (i.e. naked), so that from there I could layer on more complexity.

The second represented history and ancestry.  I kept having these thoughts of my maternal grandmother, who raised children by herself in post-war East Germany and made a living teaching piano lessons.  I thought about how she probably never had time to dance, but if she did maybe she would have danced to Chopin in her living room in her slip.

The 3rd costume was the classic iconic German Oktoberfest attire.  I never grew up in a traditional German household, but I wanted to connect to that aspect of my history.

And the final costume, jeans and an American flag t-shirt, is my version of an iconic American look: first generation American girl swept up in the experience of mixed cultural identity and trying to adopt the culture that she was born into. 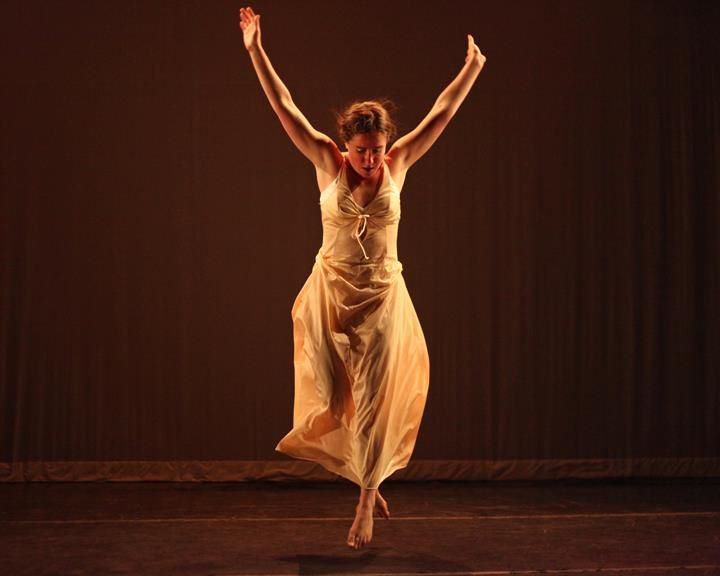 EW:  How do you feel costumes change or alter one’s identity or perception of self? Or do they?

AF: For myself, I am very interested in the ways people choose to costume themselves in the everyday, pedestrian sense.  Why do we wear what we wear?  T-shirts with symbols, certain colors, styles, combinations of things, accessories.  I think it’s actually very primal – people’s connections to clothing and objects.

EW: As a choreographer, what role do costumes play in conveying your concept?

AF: This is the first piece in which costumes played a major role.  It was important for me, by the way, to be changing in front of the audience so as to let them in on the transformation as it was happening, rather than magically disappearing and re-appearing, which has a different affect.  I feel that making “Corpo-Reality” really changed the way I will work with costumes in the future.